Getting Lost in NYC…

And Finding Oneself in the Process

Fast, strong and independent. In my eyes, this is the definition of New York City and its inhabitants.

It must be the energy that it gives, or the challenges one is confronted with. It is said that, at any given time, New Yorkers are looking for either a new job, a new apartment, or a new partner. Sometimes, all three at the same time!

And you have to move. Everything is done fast. You have to walk fast, make decisions fast, and move even faster. If there is one thing that New Yorkers hate, it’s indecision. The city will eat you alive if you overthink everything.

Or perhaps that is what makes it a place for growth. That, and the alone time, which is always plenty, especially when one is new in town, as was my case.

Two days after winning Miss Universe, I boarded a plane and officially moved to New York City for a year. 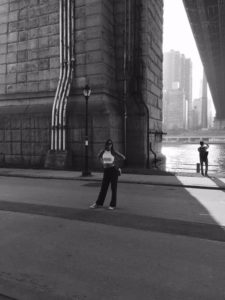 I arrived on a cold winter day, one that I will remember for the rest of my life: my first winter ever, with the snow copiously falling. I had never seen snow before, nor experienced brutally cold temperatures—welcome to New York City, I guess!

Overnight, I had become Miss Universe, moved to a new country, and I was about to start a new job and a new life, really. And this all happened at once, without anybody giving me an instruction book!

As soon as I arrived, I realized that I had to adapt not only to my new life and role, but also to my new home and I had to do it as quickly as the city required.

I ended up spending much less time in New York than I thought I would. While it was my official base for a year, most of my time was spent traveling around the world, which left little opportunity to become acquainted with the Big Apple.

But when those opportunities came, I would spend what little free time I had people-watching in Central Park and then going to bookstores, coffee shops and museums. I was getting purposely lost along the streets and avenues, curious as I was to absorb everything the city had to give. I wanted to get to know the real New York City, and myself with it.

You might be surprised to know that, despite the fast circus of people and traffic revolving around me, I felt mostly alone during the time I spent in town.

On her one and only visit to New York City during my reign, my mom got the picture right away: I had “it all,” and yet I was very lonely. Something that made me understand the importance of people and having meaningful relationships in life. You see, you can have “it all,” but if you don’t have people to share it with, you are missing a large part of it.

But I didn’t despair. As they say “when the going gets tough, the tough get going.” In the end, being lonely and getting lost in New York City, metaphorically (and literally!), helped me find my place in the world. Although NYC may slap you in the face at any occasion, it also offers you numerous opportunities to grow. If you step away for a moment and remove yourself from the madness around you, you can actually recognize patterns: you make mistakes and you learn, you fall down and you get back up, you get lost and you find your way. And this is true in life anywhere and at any given point in time, not just in NYC when you are young and new to the city.

My life in New York City started to improve during the final two months of my stay. By then, I had found a few points of reference: I had my go-to places, I knew my way around and had even made a few friends. Also, and most importantly, I had gotten lost so many times that I did find myself.

And I encourage you to do the same: wander around, ask yourself questions, push yourself to the next level, never settle and do get lost! ‘Cause it’s by getting a bit lost that you will find your way.

Before this blog happened

My stories directly to your inbox

We use cookies to improve our website experience. If you continue to use this site we will assume that you are happy with it.